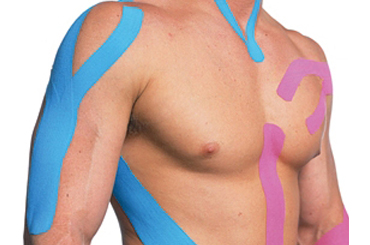 The main uses of taping are selective protection, support and offloading. In the case of certain existing injuries, the deliberate limitation of joint mobility can help to avoid further injury. The advantage of taping over complete rest is obvious: metabolic activity in the area concerned can be maintained at a high level, largely avoiding unwanted wastage of muscle tissue. Most sporting activity can even be continued, while following the advice of a physician. Taping also has an important role to play in sports injury prevention, as proven by its use of many years at elite level. While the benefits of applying traditional athletic tape to injured muscles has long been debated by experts, athletes continue to rely on various taping techniques to help them heal more quickly and protect their muscles and joints during sports competition. During the 2008 Olympic games, the benefits of athletic taping made headlines when a new type of athletic tape showed up on the shoulders, arms, legs and backs of many high-profile athletes. Volleyball star Kerri Walsh may have even become the unintentional poster girl for Kinesio tape, which was donated by the manufacturer to 58 countries for use during the Games. The Kinesio tape and its unique taping technique brought more than just a rainbow of colors to the athletes. It also brought limited evidence that it may, in fact, relieve pain and promote healing of injured muscles better than traditional tape.Traditional athletic tapes are generally applied over gauze to form a stiff, somewhat inflexible, bandage with the goal of supporting, and usually immobilizing, a joint or muscle. Kinesio tape, however, is extremely strong and flexible. Kinesio also uses a proprietary taping method complete with certification classes and seminars for practitioners. The tape is applied in a specific pattern, and either stretched or not stretched, depending on the injury. Those behind Kinesio claim that in addition to supporting injured muscles and joints, the taping method helps relieve pain by lifting the skin, allowing blood to flow more freely to the injured area. Does Kinesio Tape Work? While research is limited on the specific merits of Kinesio taping, what is available indicates that it may be effective. In 2008, the Journal of Orthopaedic & Sports Physical Therapy published a study comparing legitimate Kinesio taping with sham Kinesio taping on patients with rotator cuff tendonitis and impingement. The results showed that the patients who received the real therapeutic taping method reported an improvement in pain levels during active range of motion exercise immediately after the tape was applied. However, they did not find any differences in the reported pain levels of the two groups at any other time in the study. So far, there is a lot of growing support and some evidence for the benefits of Kinesio tape versus traditional athletic tape for helping injured athletes reduce pain and recover more quickly. I suspect we’ll see other athletic tape manufacturers coming out with their own version of a new, flexible, supportive tape shortly.